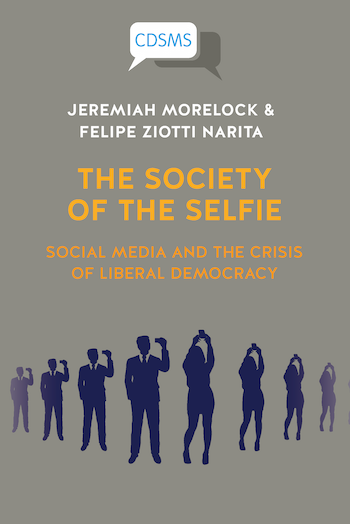 Chapter from the book: Morelock J. & Narita F. 2021. The Society of the Selfie: Social Media and the Crisis of Liberal Democracy.

We tie together and explicate the political implications of the trends discussed in previous chapters. For Fromm, sadomasochistic desires are bred from modern alienation, and these desires can fuel authoritarian social movements. For Foucault, modern authoritarianism (and genocide) is fed by the idea that the state needs to protect the normal majority from the abnormal minority (biopolitics). Giddens says in ‘late modernity’ people distrust experts, long for authenticity, lose concern with morality and fixate on avoiding risk. With the rise of global social networks, there is also a lot of reaction against globalisation. Facing porous national boundaries, many people push back against multiculturalism, seeing it as a threat to their social order. Providing examples from different countries, we describe how in other, more direct ways, social media plays into authoritarian populist ends that subvert liberal democracy. We suggest that when political leaders use Twitter and Facebook they too can project spectacular selves, and post messages that make them appear more authentic and connected to ‘the people’. At the same time, social media also offers new channels and tools for protest, activism, and anti-authoritarianism. The ‘agitation games’ of authoritarian political figures inspire their own opposition as part of their method of inspiring their own movements. Authoritarianism is a growing reality, but so is anti-authoritarianism.